Finally I got around to making a cardigan!  Now that I’m indoors all the time self-isolating, I’m always reaching for an extra layer. I was really inspired by Helen’s post about her split-hem Blackwood Cardigan. So elegant!

Helen’s instructions for the split hem were so easy to follow and I did just as she said. You can see above my split hem is blowing in the wind — I love the extra drama and movement this hem gives to the cardigan.

My fabric was a 2-yard cut of lightweight grey sweater knit from Califabrics. I had a lot of fabric leftover when I was done cutting and my husband Eric suggested I use the leftovers to add a hood. Totally!  I found a blog post and free pattern by Seamingly Smitten that I used for the hood. She has some cute patterns I will definitely try in future. 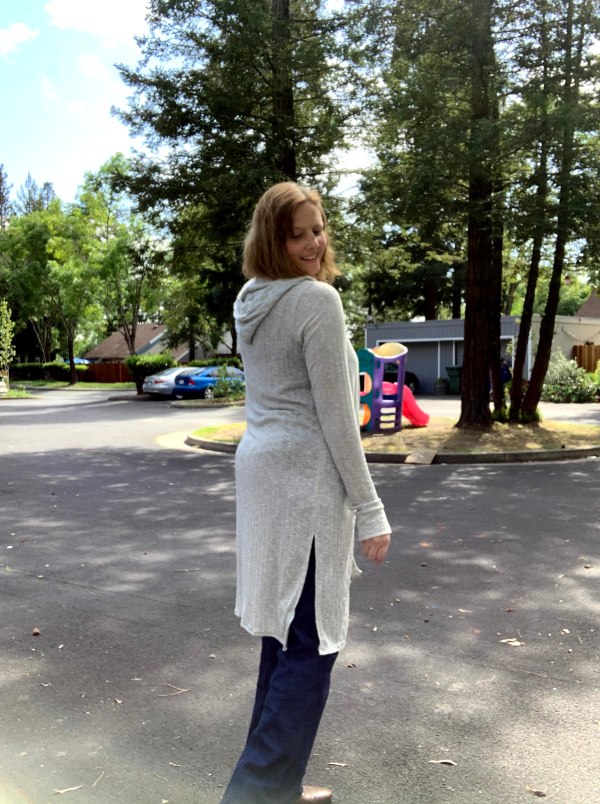 My plan for the band was to run it around the front of the hood because it couldn’t go around the neck anymore. I trimmed 4″ off the front face of the hood so I could attach the 4″ band there instead.

I painted myself into a corner a little with the hood as you’ll soon see. I finished the hood per the Seamingly Smitten instructions, then attached it to the back neck. 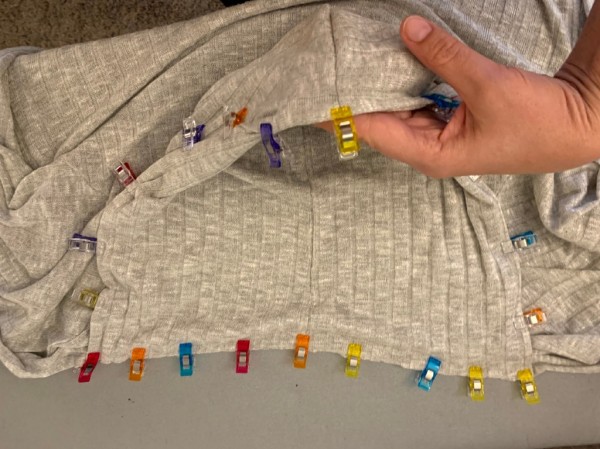 This is where it gets interesting. The edges of the neckband both need to be turned under and attached to the front face of the hood. But it’s not possible to sew inside a narrow band. Hmm.

All I could think of was to attach the band just like a waistband. Turn under 1/2″ and sew one edge of the band from the bottom right of the cardigan all the way up and over the hood and down the left side. This was a lot of sewing because this band is looong. 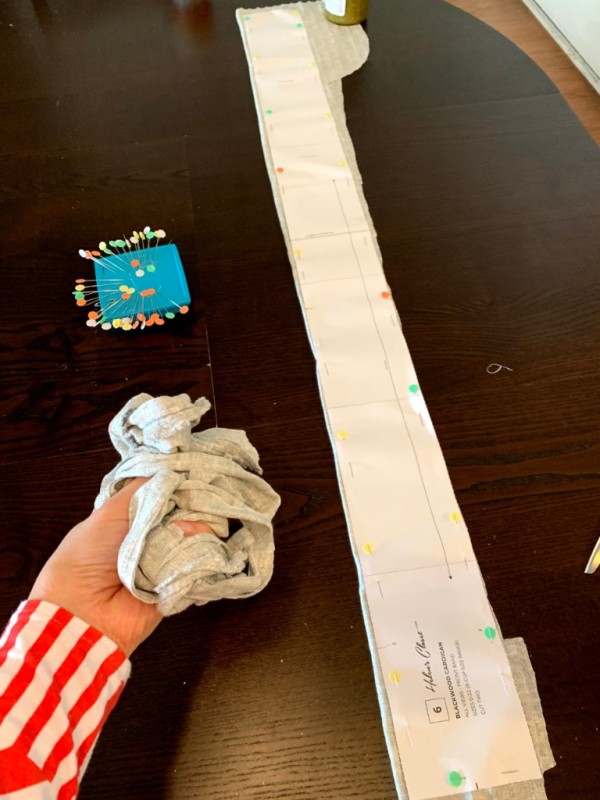 I then puzzled over how to turn under the raw edge and attach it on the inside. I could stitch-in-the-ditch from the right side, but with this light fabric I thought that would be a disaster. It’s a difficult procedure for me in the best of times.

I ended up just taking four hours over a couple days and hand-basting the band to the inside, turning the edge under with my fingers as I went along. Then I top-stitched over it with my favorite triple zig-zag stitch. It was a chore but I was happy with the result.

I’ve been getting in the habit of making things out of scraps as soon as the scraps are created and I did that here too. I just know I’m not going to rifle through a big box later and do a scraps project. With the extra sweater knit, I made up a slouchy hat, from a free pattern from Patterns for Pirates, and some boot cuffs, which are just a long tube.

I’m still amazed that a weird pile of fabric can become something I love to wear!

At this stage, I’m always doubting it’s going to turn into anything at all. But it always does! Next in my “Isolation” module: trousers. -rp

These are the Moonstruck socks! 🌙🌙
Merry Christmas in June! Just finished my 2021 Advent knitalong socks -- in plenty of time to start Christmas in July knitalongs! 🎄🎄
Saw some more rocks, buttes and gorges at Horsethief Butte near The Dalles. 🏇
Another Cape Cod Hat by Kay F Jones #bakerybearspodcast - made with @malabrigoyarn Rasta yarn. 🧶
It's the Cape Cod Hat by Kay F Jones #bakerybearspodcast - made with @malabrigoyarn Rasta yarn. 🧶
What a fun day at Frenchman Coulee today! Saw some really dramatic rocks and watched climbers going all over them. 👀
My Chanukah cowl is off the needles! The yarn is the 8 days of Chanukah mini set from @chemknits which was so much fun to open last year. Rebecca did a YouTube video for every mini skein so I saw them all being dyed. 🎨🖌
I found this great cup at Bob's Red Mill. ☕️☕️ Seemed like a genius idea to be able to tuck your teabag in the side pocket when you're done with it. 🐪
A cozy cardigan for February! 🌤
Here's the Itch to Stitch Hepburn Turtleneck!
Two knit skirts completed!
Today's top - I'll be the first to say - is a full-on Monet. Looks ok from a distance but up close it's a big ol' mess. 🖼