In these long days of self-isolation, it looks like I’m not alone in wanting to make some comfy and cozy clothes I can wear at home all day that don’t also make me feel like a slub. I really enjoyed this post today on Making With Needles, “Sweatpants Avoidance Society.”  I think we’re all fighting the urge now to give in to the empty promises of loungewear.  This cowl neck top out of a light sweater knit is just what I needed. I feel a little put-together and bonus: it looks great on Zoom. 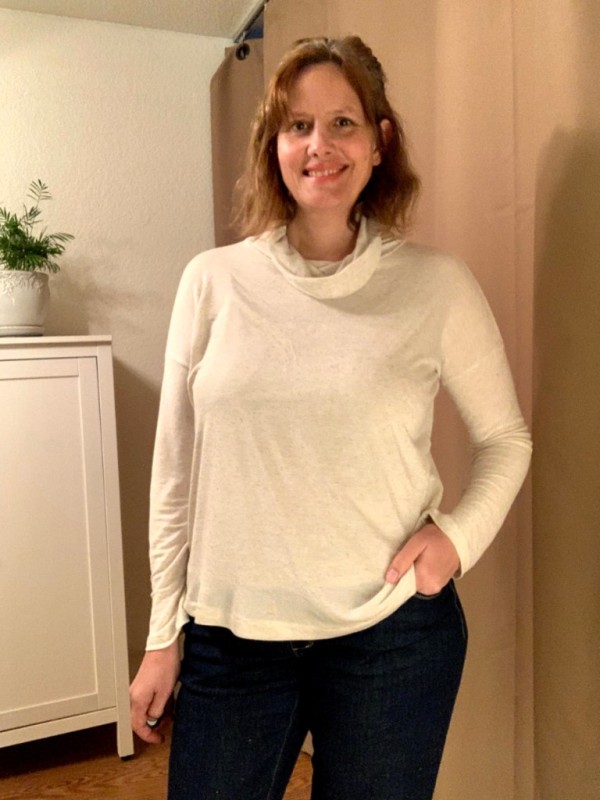 I’m also jazzed because it pairs with my thrifted brown leather vest that nothing seems to pair with.

The Hemlock is a free t-shirt pattern that’s available by subscribing to the Grainline newsletter.  I got the idea for the cowl neck from Suzanna on her Hemlock Hack: Cowlneck YouTube video. She did a series of four hacks for the Hemlock Tee and I’d love to try them all. I created my cowl neck piece exactly from the specs in the video. The video is a few years old, however, and I didn’t realize it but the pattern has been changed since. In the video, Suzanna mentions you can alter the pattern to create a drop sleeve. I did this and realized later that Jen at Grainline had already altered the pattern to create a drop sleeve. So my sleeve is especially dropped.

I also lengthened the sleeve by 2″, which I now just do by default for every pattern. The sleeve didn’t have a shorten/lengthen line so I added the length on to the end. I ended up with a dropped and drooped sleeve. It’s amazing how annoying something as simple as a sleeve opening can be if it’s not right!

I re-serged the entire sleeve to tighten this up after wearing it for an hour or so. Of course I went in too far and now it’s tight in the bicep, but I’ll just pull on it every 20 minutes for a few months and I’m sure it will be fine.

The only modification I made during construction that semi-worked out was I made the neckline higher so the cowl started closer to the neck. I didn’t change the width of the neck opening, though and I wish I had. If the entire opening was narrower, the cowl would be nice and tight like a scarf (and I would never be cold again!).

The fabric is a 2 yard remnant 56″ wide that I picked up at Sewing Studio. The Hemlock Tee instructions say you’ll need 2-3/4 yards of fabric for View A, but that was for 54″ wide and I had 56″.  I needed to lengthen the sleeves and add a long cowlneck so it was a gamble. I turned both sides of the fabric in so I could put two big pieces on the fold and it worked.  I had plenty of room left for my sleeves and cowl. 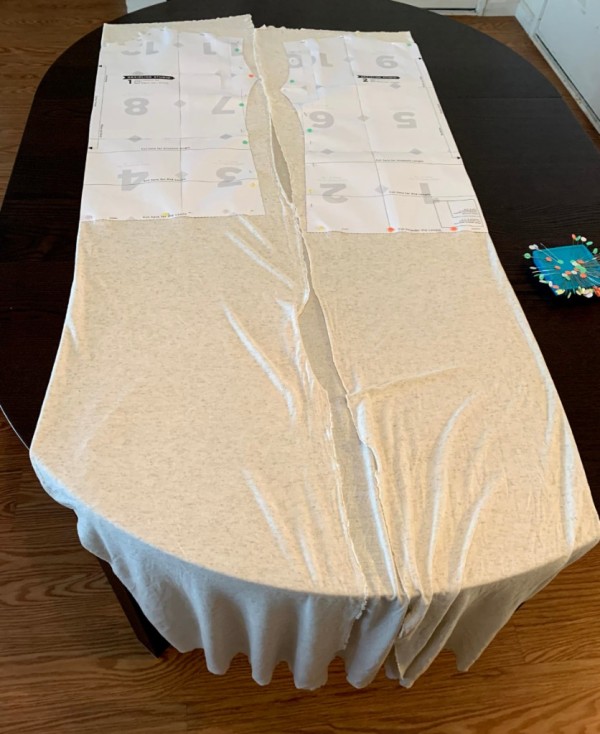 Does anyone else’s dining room look like this when they’re done cutting out a PDF pattern?

Attaching the cowl to neckline was pretty wild. There was a lot of fabric to negotiate and I was trying very hard not to twist the cowl. If you read my last post you’ll know I’ve been fussing a lot with neckbands. I just went with the included neckband size for the Hemlock and it seemed to match up perfectly with the neckline.

I stayed up late to finish this project and broke a Love to Sew podcast rule: no hemming after 10 p.m. I should have listened because the hem is visibly lower on the left side. Easily fixed by doing a Queer Eye shirt-tuck-into-the-pants-pocket.

Up Next: Another hygge sweater knit make that looks great on zoom! -rp

One thought on “Grainline Hemlock Tee with cowl neck”