The two sewing machines made it back safely with me across three states last October (2019). I set the Singer up on the table and thought, “Now what?” I wondered what kind of sewing I wanted to do. When I last sewed 10 years ago, I started with Lotta Jansdotter’s book “Simple Sewing”, which is excellent. This time, though, I didn’t want to just sew bags and aprons.  I wanted to push myself.

I thought back to when I was child again. I told you my mom and grandmother were sewing enthusiasts. Well my dad was also garment-adjacent: he worked in clothing stores. When I was 8 years old, he ran a store in Grand Coullee, Washington called Kinder’s. And this is where I began (and ended) my career as a fashion model.

So I was thinking about a particular outfit that I had modeled in a Kinder’s ad for a local newspaper. It was an aquamarine-satin with coordinating red-pant tracksuit. I got to keep it and wore it everywhere.

I basically grew up in the racks of clothing stores. Yes! I should sew clothing.  Maybe in a few years, with careful study, I can recreate my satin tracksuit and reboot my career as a high-fashion model!  Or just have some cute things to wear…

Now that I had a vision, I needed a program. Not sure what to do next, I wandered the aisles at Joann Fabrics in Santa Rosa. I spotted a book: “Sewing School Fashion Design”. It was written for kids and I thought — if children can learn how to sew with this, then I’m sure to be able to understand it. Ring it up.

At home, I followed the instructions and made a cotton shirt in size L. I held the shirt up when I was done and realized it was a child’s large. The body of the shirt barely fit on my left arm! Fail.

Despondent about all the patterns in the book being in child’s sizing, but still excited that I had learned what a facing and a seam allowance are, I again considered next steps.  Yes — to the Internet!

I’m a huge fan of online learning, especially edX. Maybe an online course in an edX-style format would be the ticket. I found the Closet Case Pattern’s Learn to Sew Clothing class and watched the promo. This was it!  The promo video really spoke to me.  Yes, fast fashion is bad! Yes, I want a better relationship with the way I look. Yes, I want clothes that are tailored to fit me.  Let’s go.

So I enrolled in the class and got started on the lessons. I dug it so much — words really can’t express. Everything that was missing from my first stint 10 years ago, and my brief stint making a child’s shirt, were here.  The instructor, Heather Lou, was so real and friendly. She even made mistakes on camera. I did my assignments and practiced different seam finishes. I posted a picture and Heather Lou was proud of me. 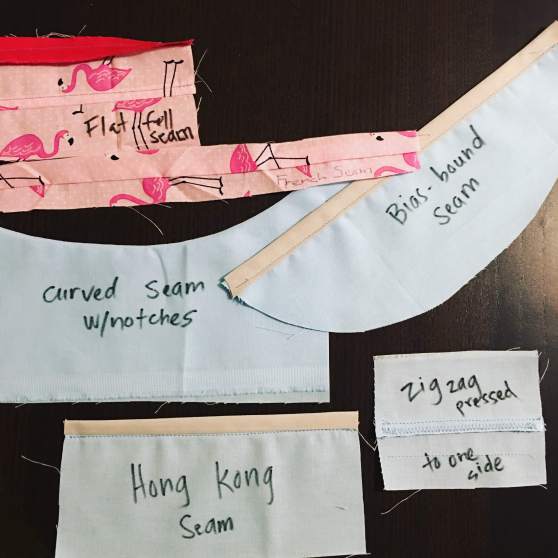 I only knew Heather Lou as my instructor at the time. Now, 4 months later, I know she’s a bit of celebrity in the garment sewing world. And what a world it is! More about that in the next post…

The class came with PDF patterns for the Closet Case Rome collection. I learned how to print them out and tape them together and cut out the fabric. I made my first shirt, then my first skirt, then my first pair of shorts. By the end of 2019, I basically knew how to sew.  I was hooked and there was no turning back.  Next: Part Three – my first makes and finding the garment sewing community.