I’m always here for a free t-shirt, so when I heard about the launch of the Sunday V Neck Tee by Friday Pattern Company I was eager to make it up. Some cotton modal jersey had just arrived from Blackbird Fabrics, and I had some nice knit scraps from other projects just waiting to be used up, so I decided to make the first Sunday V Neck for my husband Eric.

My inspo for this tri-color tee was from the pattern launch post. It’s the designer’s brother in an orange-blue-white version. I especially liked that the neck band didn’t match the sleeves! I thought about a few other colors for mine, but in the end I liked the green-blue-rust combo the best.

Eric loves his suspenders (that my dad gave him) and they look great with this tee! But I also asked him to pose with it untucked and not make a crazy face — half of that happened.

The first thing he did in his new tee was brine a turkey for dinner, proving its name as a great weekend wardrobe staple. 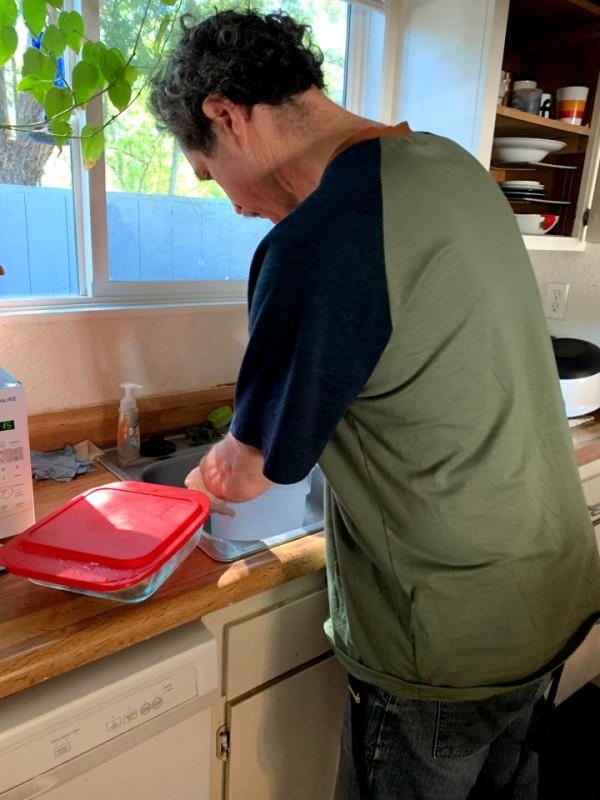 I had no issues with the pattern instructions. I love how the designer injects some fun into them and prepares you for the hard parts, like installing the v-neck, and then tells you when it’s over. The v-neck was the hardest part. I had some trouble with it in that I sewed around the whole neck and in the last 10% I discovered I had a lot of neck and a very short amount of neckband — yikes! I should have unpicked at that point, but I just pulled the neckband really hard until it matched the neck and sewed it down.  I really know better at this point and it’s no surprise that there are some puckers one one side of the v-neck.

I was very glad to use some big scraps of blue rib knit for the sleeves that had been sitting in my fabric drawer for a few months. I was just watching an Alex Judge Sews video on #showusyourstash2020 where she showed a piece of fabric she had had in her stash for 18 years!  This doesn’t seem to be that unusual in the sewing community. I’m not sure how they do it because when I have a scrap large enough to squeeze another garment out of, it’s all I can think about!

This blue rib knit is one of the best knit fabrics I’ve come across. It’s from Sewing Studio in Portland, and they still have some left in Moss and also in Pine Green, but it doesn’t look like she has midnight blue anymore. It has very little spandex (if any) and feels like a real soft and thick RTW t-shirt. I’m tempted right now to order some more …

A fun tip I used on this project for the first time was something I read on a message board: Mark the right side of your fabric with some blue painter’s tape. Knit fabrics have a right side that you can find by pulling the fabric from both ends of the selvedge (if you can find that!). The fabric will curl toward the right side. I did this and then marked my pieces. I used this reference a lot and did not sew anything on the wrong way this time.

I’m finding it really fun to sew things for my family, so you’ll see a lot more of that this year. I’m very lucky to have such sweet people in the family — both on my side and in-laws — who happily wear whatever I put on them! -rp

It's the September Wrap! Just in time for even more (ugh) hot weather. 🤷‍♀️
Eric the @hoardexplorer loves his new Tom Baker socks! 🧦
My first quilt! This is the Born To Be Mild quilt featuring at least 100 sloths. #sloth 🦥🦥
A finished object! These scrappy Wrist Ticklers -- a free pattern by Kay F Jones @bryonybears -- were the perfect project for these last two crazy weeks, when I've been moving to a new house. 🏠🏠
Today on the blog I chat about my experience with knitting to a schedule. Hint: I love it! 🙇‍♀️
Happy #memademay2021 all!! ✂️ My pledge this year is to wear one me-made item everyday -- and try not to wear the same thing twice! 👕
The New York Times style section says skinny jeans are out and baggy is in. Lucky for me because I just finished these Liana Stretch Jeans by #itchtostitchdesigns and they're baggy as heck. 👖👖
My best fit yet for a sock! These are the Snow Forest socks, pattern by Kay Jones. ❄️🌲
Don't Stop Me Now! 🎶🎤
Rainbow mitts to match Portland's houses! 🏠🌈
I finished my first design! It's a headwrap knitted with the lovely and soft @malabrigoyarn Caprino. 😻
My first hand-dyed yarn! I used KnitPicks bare yarn and Jacquard dyes from @makersmercantile -- which arrived super-fast on Saturday and let me get busy over the weekend. 🚛