Fibre Mood is a sewing magazine, created in 2018, that I’ve heard so many good things about. After hearing Victoria Lucille Anne rave about several of their patterns, I had to give them a try. I ordered a back issue — English edition No. 7 — from ebay and flipped through it for several months without making anything. I’ve never made a Burda pattern, nor anything where you need to trace off the pattern from large printed sheets; I was a little intimidated. One evening, I decided to tackle this magazine and so picked the two patterns rated the easiest: the Maddie skirt and Alexa dress. 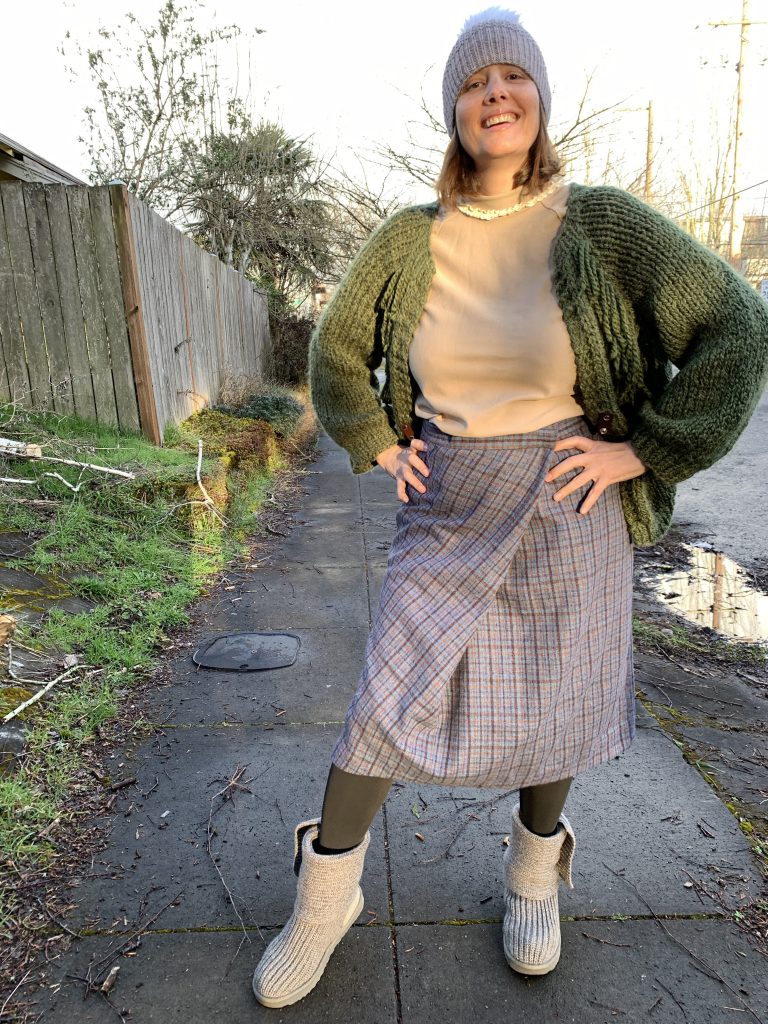 I seriously considered making the Alexa as a dress, but just thought it would not get a lot of wear. I do wear high-neck tops very often, under sweaters and jackets, so that seemed the best route. 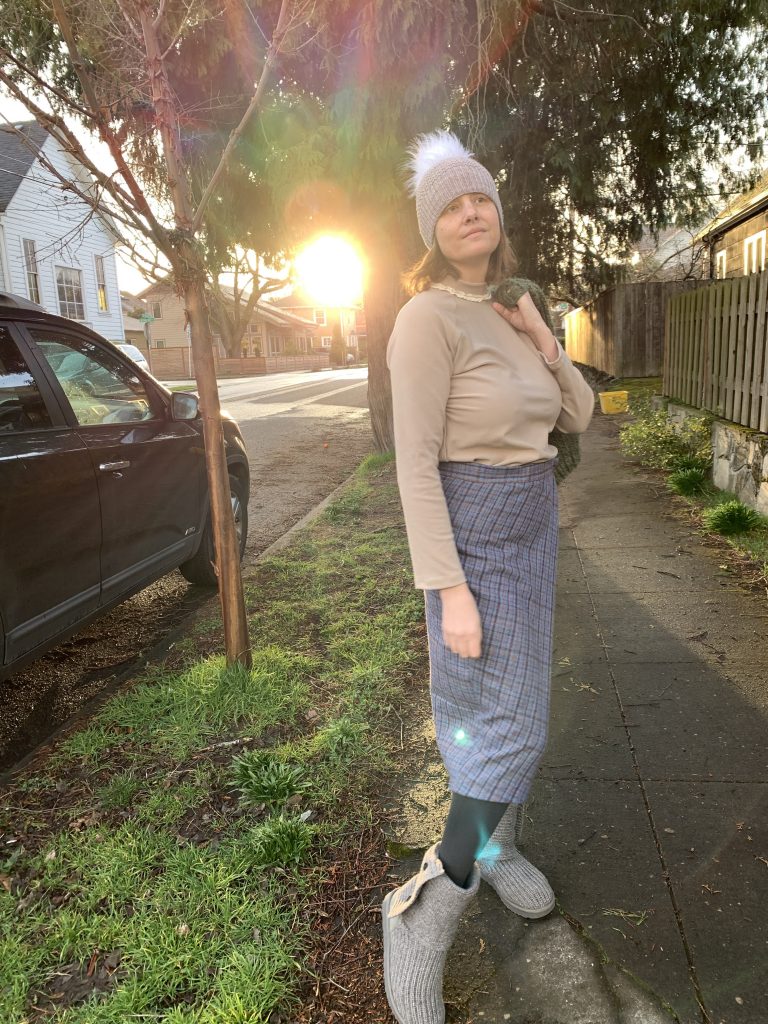 Tracing the patterns was really no problem. I actually found it to be a lot of fun! I covered their pattern sheet with a sheet of my tracing paper on a roll and traced the outline of one piece, then I’d cut that whole square off the roll and do it again. (I probably wasted a lot of pattern paper but I’ll be more efficient when I’ve done this a couple times…) For both patterns, single pieces were broken into parts, so I would do those on their own sheets and  — once I had all the pieces traced and the seam allowances drawn on (don’t forget this step!) — I taped those two-parters together.

I found that drawing in the entire seam allowance was not necessary. Pencil ticks made with my ruler were enough to cut a proper seam allowance all the way around the piece.

In sewing the Alexa (and for the millionth time), I sewed the neckband onto the wrong side of the top. Instead of crying about it (for once), I sewed some ruffle ribbon I had lying around over the top of it. In the end, the top really benefitted from the embellishment.

I’m excited to announce that these two makes are the first with my new sewing machine: a Baby Lock Brilliant. I’m already crazy about this machine. I went really as far as I could with my 1950s Singer. Of course, nothing will happen to it — I plan on using it as a second machine for topstitching jeans very soon.

The Baby Lock had absolutely no problem with the thick ponte knit that I used for the Alexa top. It shipped with a walking foot, which saved me ordering one. It uses the same needles as the Singer, and I tried a ballpoint needle, but the ponte was too thick and even the Baby Lock was skipping stitches. The default needle on the Baby Lock seemed to work just fine so I stuck with that.

I would not recommend a ponte knit, like I used, for the Fibre Mood Alexa. Ponte is a great choice for a dress, but with the high neck and long sleeves on the Alexa, it looks and feels like I’m wearing a rash guard. I could definitely take this top on my next trip to Hawaii and would be safe in the ocean from jellyfish stings.

The Maddie skirt was a fun make. The fabric is a beautiful piece of wool I found at my neighborhood thrift store, Re-Use It, for $5. I would guess it was once a Pendleton something, as the Pendleton Woolen Mills is very close to here. Wool was an excellent choice for this skirt because it’s thick enough for comfort, but has enough drape to show off the fun twists in the wrap. Paired with fleece tights and Uggs, it’s definitely Northwest-winter appropriate. 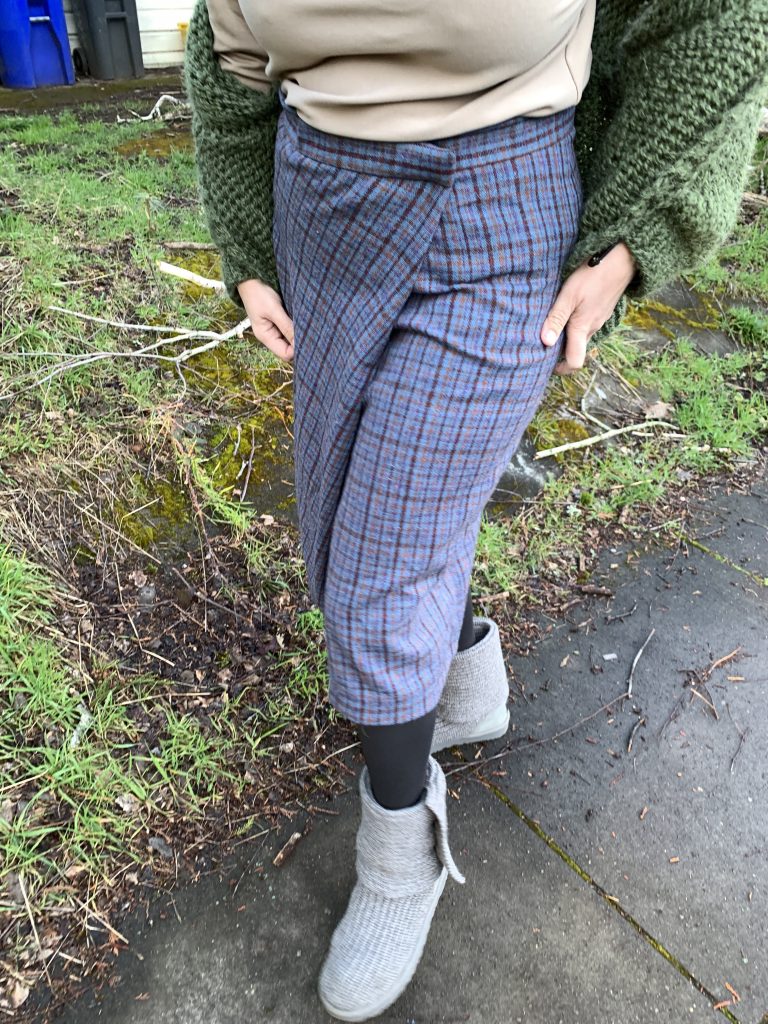 I say wrap, but the Maddie skirt is actually a faux-wrap. The skirt front is one piece with a simple slit from the waistband down about 11″. The slit is essentially wrapped with a bias tape made from the same fabric. It’s a fascinating design, and I’m sure will be warmer and more wind-proof than a traditional wrap skirt. 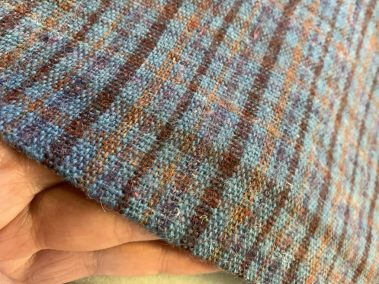 The instructions called for hand-sewing the hem, but my hand sewing always looks atrocious. I was eager to try the blind hem on the Baby Lock. I was very glad I did because it was easy, gorgeous and completely invisible.

In my case, just snaps on the Maddie skirt were not enough. The left snap kept popping open, so I reinforced the area with a hook-and-eye closure as well. It looks a bit overkill, but at least I’ll be confident my wrap skirt won’t unpeel when I’m in it.

These two makes are the first in my Winter Module 2021. I feel I’m off to a great start! -rp

New Christmas project bag! I made this from 5x5 charm squares sewn together and quilted. ✂️✂️
Five advent calendars this year. Too much? Naw!
Second and last Halloween socks are done. 🎃 We can now move on to Thanksgiving.
Amazing day of fall brilliance at the Japanese Garden yesterday! @portlandjapanesegarden
Pillowy fig bars were next up in cooking through the Good and Sweet cookies & bars chapter. 🍂🍁
Sockoween™️ socks finished! These are the Crunkled Socks - pattern by @bryonybears Kay Jones. 🎃🎃🎃
Nana Wafers from #brianlevy book Good and Sweet. The two bags of freeze dried bananas in these pack the biggest banana taste ever! 🍌🍌🍌
More cookies from the Good & Sweet cookbook by #brianlevy. These are pignoli cookies - a simple mixture of dried fruit and egg whites rolled in pine nuts and baked. Simple and really delicious!!
Second recipe from my new cookbook Good & Sweet by Brian Levy: salted chocolate buckwheat cookies. 🍪
Did some experimental baking today. Looks good - we'll see how it tastes!
My 2nd-ever sweater is done -- and just in time for fall! 🍂🍁
Eric's got some new Tinsel Socks! Just finished these for a Christmas in July knitalong.